I have long been enamored with the sky.  In the day.  At night.  Full of light.  Full of halflight.  Full of darkness.  Full of stars.  Full of everything above the ground and beyond this place.  It is this immense everything, the infinite unanswered that both unsettles me and gives me the greatest solace.  I believe in science, but even our greatest minds cannot explain everything.  On good days, I wrap myself in the unexplained and trust.  Not all days are good.

Dave Healow loved the sky.  I was introduced to him around 30 years ago by the man who first introduced me to a program of recovery that saved my life and continues to at least do that, if not give me a life strange and wonderful and eclectic and beyond anything I could have planned or designed.

I joined Dave a few years later on that same path, and we became closer over the years as we met in and out of our common rooms with our other fellow travelers.  He was always someone I enjoyed seeing and talking to, conversations that began with a small smile or a smirk, as I think we both knew that things were about to get clever or meaningful or honest.  I could go as deep as I wanted to go as fast as I wanted to do it with Dave.  Due to distractions and lack of action, I hit a bottom in my sobriety in my 12th year.  I'm sure he would agree that I was in so much pain that I rather drug Dave through those steps with me.  After making and sharing yet another inventory and beginnings on yet another round of identifying and letting go of my defects of character, I set out on what I called “The Love Warrior Tour,” based on an album by Tuck & Patti of a similar name.  I vividly remember sharing with Dave the beautiful, unplanned, suspicious things that were happening simultaneous with this self-searching, truth-telling, spiritual work.  I remember him kindly laughing at my ups and downs, saying, "I don't even need cable TV [with this stuff]."

He was without a doubt the smartest person I have ever met.  He was also filled with patience, tolerance, kindness, curiosity, understanding, humility, attentiveness, generosity, and good will.  He was a scientist, a tinkerer, an observer, a data compiler, a reader of books and people and patterns.  And yet, he was hardly above all this and the rest of us and would observe and speak on himself seemingly in the first and third person at once.  He was just as tickled, dumbfounded, and yet unsurprised by the rest of humanity as he was by himself.

I almost never ended a conversation with Dave feeling both better and worse than I did when I started.  On one hand I felt heard and understood and that Dave had absorbed the information and that it had made him stronger, editing and/or creating rows in his database of human interactions and experience.  On the other hand, in the process, he had called up and relayed some information from that same database - some study or factoid or analogy or quote or distillation of previous interactions – that was helpful, but humbling in its depth, and often times way beyond me.  He was the earthly embodiment of a Spock-like hippie Renaissance Man.  Somehow, he seemed to have both feet firmly on the ground and yet never touch it at all.  And I can hear some murmur of his self-deprecation at these words.

He seemed to react quietly, calmly, and logically to all people and in all situations.

I cannot recall Dave ever speaking ill of anyone.  He would instead speak with fascination and amusement of humans and the human experience.  He would mostly speak in general terms, tendencies, or his own personal peccadilloes.

Dave's body left this world on Saturday, January 11, around 5pm.  A 50-year pilot and flight instructor, the plane he was flying clipped the guy wire of a cell phone tower 30 miles north of Billings, Montana.  There were three passengers on board, younger brothers in recovery he was taking on a joy ride.  As tragic and unexplainable as it was, they were not alone.

It has never been clearer to me that great people never really die.  Great people are so defined by their perspective, their thoughts, their decisions, their words, and their actions, filtered through goodness and humility, and the sharing of these gifts with those around them.  And whereas their physical bodies may leave this place, these spiritual remnants remain.  These gifts are embedded in the rest of us like welcome, splendid splinters we want never to remove.

"It takes a village to raise a child" may be an African proverb, but it is a universal truth, especially in recovery.  My sobriety is the product of every meeting, every prayer, every cup of coffee, every word of every person who shared, every person who identified as an alcoholic, every Step I worked, every washed cup, every second of fellowship, every phone call I made, every call made to me, every time I told on myself, every second that was given to me by someone who gave the same to them, every step I took into the unknown, ad infinitum.  My sobriety is the most beautiful stained glass window imaginable, increasing in its brilliance and array of hues to the degree of my humility and willingness, made up of all these moments and pieces of my fellow travelers' experience, strength, and hope, and their absorption and translation into my own.

Some of the quietest, most varied, and brilliant pieces of my stained glass are his. 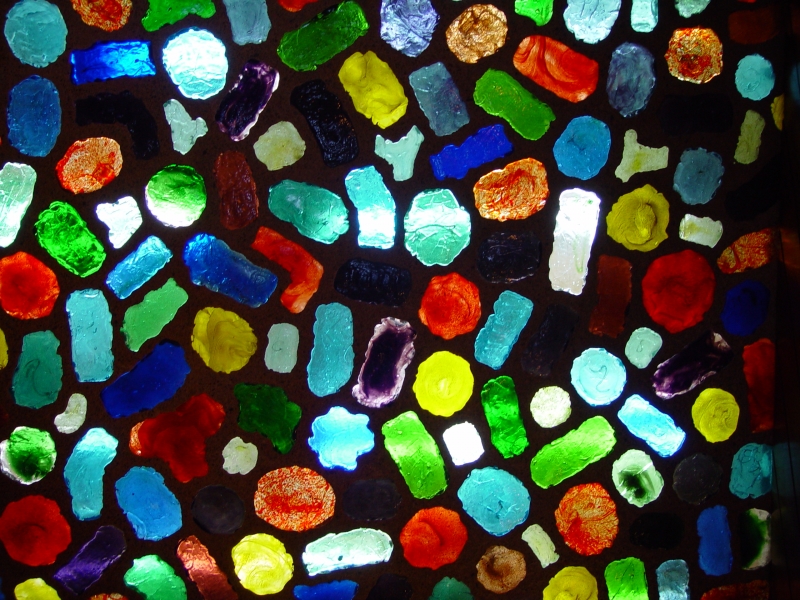