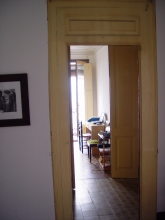 It was here that I began to use a pen less and a camera more.  This was a strange, unsettling transition for me.  I had returned from Costa Rica 2 ½ years earlier, where I had written much and taken very few pictures.  I believe I have a few packages of developed 35mm prints from a cheap point-and-shoot.  But I do have 250 pages of journal, non-fiction, poetry, and short stories from my time there.

This photography thing seemed lend itself to a dangerous way to at once freeze a two-dimensional moment in time and yet miss the experience, the surroundings, the context, the sounds, the wind, the laughter, the fluttering of leaves…

Jeff Peterson, one of my favorite professors from college, was now leading “educational tours.”  He was bringing a group to Spain, and we made plans to meet in Madrid on October 20, 2002.

I was transported seven years back in time…

We are receiving our first essays back in Social Issues in Education, a reflection on Lives on the Boundary by Mike Rose.  Jeff comes upon my essay and calls out my name to hand it back.  With the slightest of smirks, he asks me to stay after class.

Thirty minutes later, everyone is gone.  He sits back in his chair, smiles, and asks, “What are you doing?”

…He was right.  And now I was taking more pictures than I was writing.

These remembrances and revelations and rumblings were exacerbated by what had become quite an appetite for travel.  All these elements converged and gave birth to PROJECT 1:1000, which was at first solely an educational tour program, and a way to write myself a job with Jeff’s educational tour company.

I subsequently sketched out a history, thoughts, and quotes in preparation for our meeting in Madrid.  I pitched him with early notions of the premise and content, proposing a program/tour that focused on experiencing new places at the rate and ratio of one thousand words per image.  The original Overview page amounted to a statement of purpose and call to action.

There would turn out to be no room for me the company Jeff worked for.  But, hardly was all lost.  The work had been begun.  The seed was planted.  It would take seventeen years to break the surface.

I secured employment in Montana for summer 2003.  I spent my last two months in Europe traveling mostly by train through France, Germany, Holland, England, Ireland, Sweden, Italy, and Greece.

I returned to the U.S. with around 10,000 pictures.  I printed up some photo albums, and as people started buying prints, I myself was sold.  I could “create” (as lazy as it still seemed) and earn money.  More importantly, an accountant friend said I could write that travel off as expenses if I could justify it with income.  Boy was I sold.  So I bought in…

I bought a cheap lighting setup for my living room.  I practiced and made hostages of friends for models.  Empowered by making maybe $5000 in 2005, I made the ill-advised decision to sign a 2-year lease for almost $900 per month.

I bought lights and studio equipment.  When stuff arrived, I figured it out.

Again empowered by the trajectory of things, I made an impressive business plan, and secured a low-interest loan from the city as well as investors (i.e. Mom and Dad) to help with a down payment on a historic building.  The main floor would be del Alma Gallery & Studio and my photography studio.  The basement would be rented out as office space.

Thank God for that rent, because the trajectory was derailed by the tag team wood chipper of the economic crisis of 2008 and the increasing rise of digital photography.  My resentment was slightly tempered by an acknowledgment of irony.  I was a digital photography bandwagon guy myself.  I was just on one of the earliest waves.

Bit by bit, I began to lose the will to fight to be seen in the rising seas of “photographers” in the area.  More and more people began shooting for less and less money.  Cameras and software got better, cheaper, and easier.  My original misgivings regarding photography resurfaced and I longed for a return to words.  Maybe a combination of the two.  Thoughts of Project 1:1000 made me smile.

I was over it.  I would intermittently hang a FOR LEASE/SALE sign in the storefront window for years.  But then circumstances would get better and/or I would feel better or afraid of what to do next, and pull the sign down.  Rent was coming in.  I moved into the studio to save money.  I got soft.

Finally, in the summer of 2016, someone saw that sign, made an inquiry, and we kept talking.  In a 2-month blur, I sold most of the office supplies, furnishings, and studio equipment; packed my things into storage; and moved out of my home of 4 ½ years.

The morning after the closing, I boarded a flight to Philadelphia.  I rented a car and drove around the October northeast.  I spent 10 days in Ireland.  I returned to Montana in November and set my sights southward.

I had dreamed of this roadtrip since 1997 and now the stars had aligned for me to do such a thing. I paid off my loan to the city, paid off Mom and dad, and bought a 2005 Dodge Grand Caravan SE for $2000.  And on December 15, 2016, I left Billings, Montana.  Destination: Ushuaia, Argentina.

The journey would last 18 months and take me 25,000 miles through Mexico, Belize, Guatemala, El Salvador, Honduras, Nicaragua, Costa Rica, Panamá, Colombia, Ecuador, Perú, Bolivia, Argentina, and Chile.  I amassed 28,000 photographs and 4,000 videos.  Photos and videos of the journey are available for viewing at www.davidoverturf.com/Alsur.

The combination of the consummation of a dream - something that had long been on my list of Things to Do – the literal momentum generated by such a journey, and the need to ground myself and stop the world from spinning (or speak its gyrations) with creation, conspired to work on a few projects during my roadtrip.  I spent a month in Granada, Nicaragua; a week or so in Vilcabamba, Ecuador; 4 nights in Los Molinos, Chile; and my last seven weeks south in Valparaíso, Chile working on other items present on the Things to Do list for too, too long.

Project 1:1000 was one of those items.  I fleshed out the educational component, which began and to then still only consisted of a university focus.  I spent much time on a site map and desired elements and functions of the website.  It would be a place where multiple users could sign up, each with their own page, come together, and write and read and share 1000 words and 1 image at a time.

Intimidated by the prospect of a novel and overwhelmed by the sheer mass digital content, I planned on presenting my visions and estimations of the roadtrip in the 1:1000 format.  It would be called “Roadtrip 1:1000.”  It would tell at least bits of my tale, and it would serve as an introduction to the website, and Project 1:1000 itself.

I was not particularly looking forward to coming back to Montana, United States in 2018, but I had a plan.  I came back in June and was subsequently robbed, found out a storage unit had been leaking, took a former friend to small claims court, bought a car that subsequently blew its engine, and spent months on a promotions and fundraising pursuit that ended up going nowhere.  All things considered, 18 months traveling through some of the most dangerous parts of the world went much more smoothly.

Once again, the stars aligned, and I was presented with what I believe to be the most gracious offer I have ever received.  A family friend offered me what was essentially a benefactor situation at a mostly unused family house right on Puget Sound.  I brought a carload of things from Montana to Burien in mid-January 2019 in order to write my book and find someone who could build the type of website I had imagined and laid out.

I got settled in and began searching for a web designer.  There was an auspicious meeting at a coffee shop in Renton with my family friend, his technology guy, and myself.  I showed him my site needs and map as well as some sample pages I had created.  I told him of my experience writing rudimentary code in the early 1980s, maintaining my own website via HTML for years, and my general experience with computers and software.  He said that it would be tens of thousands of dollars to code what I had envisioned from the ground up, and that what would probably serve my needs would be a content management system, specifically Drupal.

Since that day in late January, I have done little else but work on this website, further defining and sculpting Project 1:1000 along the painful way.  I feared I may have oversold my technical abilities.  The learning curve has been brutal and unforgiving.  It has been the most maddening, exhilarating, humbling experience since, well, my roadtrip.  I have been blessed to bring these dreams to fruition on the shores of the ocean.  She has cradled me and offered her examples of depths and waves and persistence and constancy.  It has been one of the greatest adventures of my life.

I have made beginnings on the recounting of my roadtrip, but the website and application of Project 1:1000 have taken precedence.  For now.  Rest assured, I will tell my story soon.  One thousand words at a time.