I knew I was a writer. At least I fancied myself one - from way, way back. Then I fell in love with the theatre, receiving a Bachelor of Fine Arts in Acting in 1994. Then I hit the dark, fortunate, beautiful bottom of a life needing drugs and alcohol to survive, and my second life began. Shortly thereafter I received a Bachelor’s of Science in Education, and became a certified teacher of Spanish and Drama, then 2 ½ years in the public schools of Chicago, a year in Central America, and an eight thousand mile, long-way move from Montana to New York City, where I landed in a closet at a friend’s apartment in Brooklyn. I started a twisted greeting card business while there. I bought one a them new digital cameras for graphics for the cards. I began taking pictures of unparalleled NYC. I enjoyed these brief, quiet moments of capturing this great place. I awoke one morning to find Manhattan on fire. All the pictures I had taken of The City had more depth. I had been tutoring Adria from Barcelona. His mother invited me to come visit Spain. Ten months later, two days after being the officiant in a dear friend’s wedding, I flew to Barcelona, where I overstayed my welcome with the gracious family, then found an apartment in the old part of the city. Next door was a 16th century government building.

Somewhere in Spain, photography became a new anchor to the world for me. Less writing – more pictures. I considered myself – and still sometimes do – lazy for this tradeoff. I couldn’t help it. I knew I wouldn’t be there forever, and it was so old and rich and beautiful.

My father came for Christmas 2002, bringing me a used camera I purchased from a friend. My friend’s hand-me-down was a step up for me. We traveled through Andalucía. We took a ferry from Spain to Morocco.

It is December 27, 2002. 12:05pm. Suddenly I find myself in the casbah - “an older or native quarter of many cities in northern Africa; the quarter in which the citadel (‘...a stronghold into which people could go for shelter during a battle...a fortress for protecting a town, sometimes incorporating a castle.’) is located”

I am with my father, who invented stories to put me to sleep and wake up my brain forever as a child. This is perhaps our greatest adventure ever, though we don’t acknowledge it at the time. But I mostly feel like a tourist. We are rich Americans taking in the quaint sights, sounds, and smells of old Tangier. I am glad to have our tour guide, Saíd. He seems honest, trustworthy. But it has only been fourteen months since September 11. Tensions are escalating between America and Iraq. There is a paranoid part of me waiting for this to go terribly wrong. We will blindly follow Saíd down a darkening alley, then into a shop with a stale smell. The door will close behind us. Middle Eastern monsters will come out of the shadows. Our throats will be cut. Maybe with scabbards. At best, we will be taken hostage. I am taking my final pictures. Ever. Someone will find my camera. I will be famous. No. These shadowy enemies will just sell my camera. Or keep it. Or destroy it. Filthy Americans. These are my final minutes.

None of this ever happens. Saíd introduces us to his family. They are beautiful. I have been programmed. I am ashamed. I tell no one. Until now.

We pass shops selling infinite rainbows of thread, shops for the sale and repair of shoes, shops where the shopkeepers nap.

Fruit for sale, overripe, bruised. Bags. Belts. Rugs. Buttons. I am dumbfounded and elated by a herd of sheep strolling mostly unnoticed through the midday noiseless bustle of this place.

I stop at an intersection of footpaths. It is a dirty, immaculate sight.

The sun bounces off balconies and laundry and awnings and dribbles down the cobblestone, cascading through the unsteady buildings, creating pools of darkness and light through which I perceive these simple people go about their simple lives.

There is surely nothing of great import or consequence here. No one but me knows they are here. History books aside, what have they really been doing all this time before my arrival? And what on earth will they do when I am gone?

I am stirred from my egocentric daydream by a small boy in a blue and red sweatshirt who walks into the frame. His two eyes don’t focus on the same thing at once, but he is definitely looking in my direction. He sees the camera and the uniform of a tourist. He sees me taking pictures of his home, a place whose walls he has never traveled beyond, the only place he has ever known. His world is small. There is nothing beyond this.

I wonder if he wonders about me. Where I come from. Where I live. What it is like there. How many people are in my family. Who I share a room with. Maybe if I have a real soccer ball and green grass to play on.

I continue aiming up the cobblestone street, at this still-life scene moments before so...frozen. Two-dimensional. It is now interrupted, alive, demanding interaction. He has thrown himself into and shattered the perfect stained glass of the it. He is part of it. He is the focal point. He is it.

He is reaching out his hand.

My heart is beating.

I am holding my breath.

I lower the camera to include him in the frame, sacrificing the place for its people. A boy…

It’s the least I can do.

I could do less.

I could ignore him.

I give him nothing.

Except this small immortality. 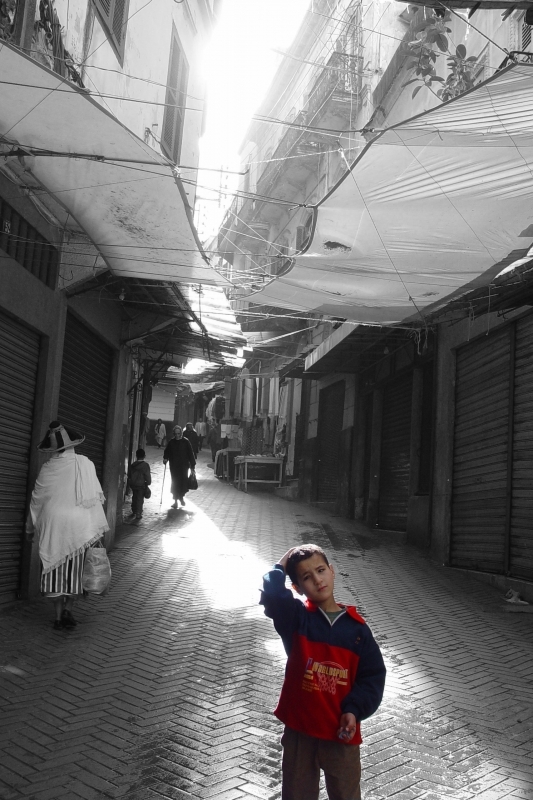 SUBMISSION TITLE
The Boy in the Casbah