My dear wife and soulmate began planning several weeks ago for this trip we’re on. To be a bit more honest, I told her I was taking 5 weeks off from work because I needed a break.  Planning ensued. We’re currently in the final week, making our way back up the Pacific coast. I told her this morning that I feel younger and lighter than when we left. It is true.

In addition to our cosmic canine companion, we’ve had another traveler along with us, at least I have.

My friend Mike died in January. He was diagnosed with cancer in early November and started chemotherapy within a couple of weeks. That treatment made him gravely ill. He was hospitalized in late December and never went home. He and I had our last meaningful conversation on December 30th. The ICU was relatively quiet that night, aside from the nearly constant nurses in and out of the room adding, changing, removing things. That is the nature of ICUs.

Amidst the beeping and buzzing and obvious signs Mike was very sick, we talked.

He said he was done. He didn’t want to fight or treat the cancer any longer. I asked him if he had anything weighing on his mind, the he felt was unsettled or needed resolving.

“Remind me if you believe in heaven”, I asked. “Do you believe you’ll see loved ones after you die? Are you looking forward to seeing your mom and dad again?”

“Yeah, I’ll get to see my mom and my dad. Yeah.”  His voice sounded childlike in its innocence, like a kid excited and relieved to be going home from sleep-away camp.

I told him that I would make sure that folks in our community knew of his illness. He seemed especially interested that I let folks know when the memorial was scheduled. I also reminded him then and several times in subsequent visits about my upcoming trip and that I’d be out of town for several weeks from late January through most of February. At that time, though he was very sick, I didn’t know if he would die in the night of live for several more weeks.

“The life force is funny that way. No one can predict who lives or when someone dies. Know that you have helped a lot of people along the way”, I assured him.

I went home that night and began collecting thoughts, ideas, and memories that I planned to include in my comments at Mike’s memorial. I added to and edited that document several times over the coming days.

I got a text that Mike had died overnight on the morning of January 14th. I captured a few more details in the document. Then I let it sit for a few days. Arrangements had not yet been made and I was leaving in a few days to begin my journey, first to Maui for a week, then a 3-plus week road trip to the southwest US. I mentioned this several times to the people making the memorial arrangements. I knew I wasn’t the most important factor in planning the event but I was hopeful they would schedule the service for a date after I returned.

That was not meant to be. In fact, they forgot to tell me once the date was set so most of the folks already knew the details when I learned about them at the Maui airport and began my efforts to spread the news.

All this time I was contemplating what I could learn by these events unfolding they way they were.

As far as I know, outside of Mike’s family - and I’m not sure how consistently he kept in touch with them - I’m pretty sure, for the last several years at least, I was closer to him than anyone else on the planet. He called me nearly every day for the last 10 years of his life. And to be honest, that was not the easiest job for me. In fact, Mike challenged me in ways that I hadn’t expected. I grew spiritually and became a better, more patient, and more tolerant person because of him.

Through Mike I learned about standing by someone in the face of powerful criticism. I learned about giving someone the benefit of the doubt in spite of public opinion. I learned that I can’t change everyone’s opinion but I can form my own and act from there.

Another dear friend read my written statement at Mike’s memorial. Apparently it was well received. I wrote about my failure to understand the timing of events and the belief that someday maybe it will make more sense, about relying more on my Higher Power and about missing my friends and my community during this time. I wrote about memorable aspects of Mike’s personality that I thought would resonate with people - some that would bring a chuckle and some that might inspire a few tears.

I chose this picture to accompany my story because it is a giant Sequoia from the Redwoods National Forest, one of my favorite places and one we visited on our trip. Sequoias can live for 2,000 years or more. The trees in this forest have never been cut down. I imagine all they have been through as they have held their ground as the planet has changed around them. In Sequoia terms, it has only been a few generations since dinosaurs walked the planet. An ice age came and went.

Finally, I chose this picture because, like my current experience with Mike’s passing, I can’t see the top of this tree from this vantage point. I’m not sure I ever will, but I know it is there. I know this tree did just fine before I got here and will likely live long beyond my time here. And so my hope remains that I continue to seek understanding and try and be helpful to those around me. 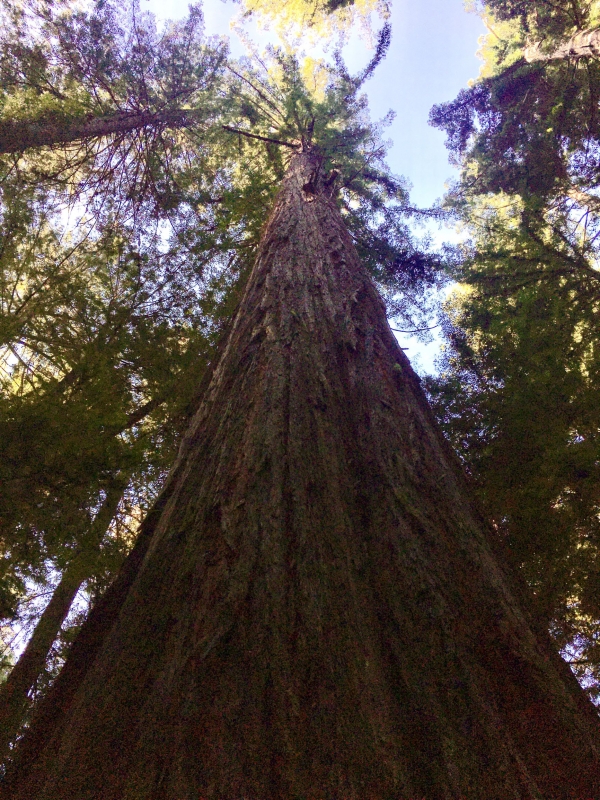