So, this is the story of this tree I took a picture of in April about two years ago. We were shooting the Giant ranch Which is near the highway to get to Greatfalls. It was a very big ranch in Montana, the owner is a wealthy guy who had a lot of cool things on the ranch, like a $200,000 dollhouse for his daughter when she was young. They even raised pheasants to be hunted just for some more business.  They raised dogs from when they were young to sniff pheasants out. Part of it was even established on a town that became a ghost town. It turned into a ghost town because it was completely rated by Indians. The ranch was a giant ranch.

So, we had just been done after a photoshoot of a very pretty river and a dinosaur skeleton, the dinosaur was not a real skeleton, and we ended up getting stuck it a river because we had to cross it. It was a very muddy river so it was pretty easy to get stuck.

My dad is a professional photographer. He was hired for the Dearborn Ranch because he Had done a lot of ranches in Montana, so people had high opinion of him. Who are we got into this situation is that there was this metal dinosaur skeleton that we were taking pictures of it because it was created because the owner of the ranch, Donated to the Bozeman Museum for the big T-Rex. So, we were taking pictures of this dinosaur and there was this road that we had to take to it but we had to cross a river and so we got stuck in the mud right by the river. It was literally like a shallow river to. So, we started hiking into the mountains to find cell service. And the first hill there was not good lighting so he did not have enough exposure to take a good picture so we could not get a good picture on the first hill. And there ended up being three hills.

Then when we got to the second hill, there was still a good amount of light. So, we were chasing light so that we could get good pictures for that night of shooting pictures. It was still a little bit too bright out, well maybe I didn’t know exactly what to do. So, I didn’t have any good pictures because there was a lot of sunlight, and it was hard to find the right exposure for the camera to take pictures of things. So finally, I got the right exposure on the camera I was using, I had some bad pictures, and I had some good pictures we were still trying to chase the light, because we wanted to also get to cell service before dark, oh yeah and if I haven’t said it yet we were stuck in a river.

Under like 6 inches of mud just getting deeper and deeper into the rivers and mud. Anyways so you’re also chasing cell type service which was a few miles away we had to get over these hills to get to the cell service where we only had even like two bars in the end. There were a few cool trees I took pictures of none of them were as good as the one at the top because there was just too much light on them and there was no shade for some of the trees to give them shadows to make it look cool as a picture.

WE get to the third hill we’re both exhausted and we are losing light sort of fast, so we had to move fast. We then were at the bottom of a hill, between two hills.  So, we decided to lay back for a little bit and take some pictures, I then stumbled upon a tree that was about halfway up the last hill. There was a tree a little up higher than it that was on the hill, and it was blocking some of the light on the tree I found. That was like in between the two hills and was getting light from a tree on top of the hill closest to the east which was where the sun was setting. I took this picture when there was just enough light to touch parts of the tree. Because there were trees up higher on the hill that were blocking some of the light.

We then went up on a big rock, which was hard enough to hike all those hills but to then almost start rock climbing was hard. We then where at the top of the rock and we went from 0 bars to 3 bars. And we called the ranch manager and didn’t pick up the first time, so we called him again and he picked it up. He said he was on his way before he started laughing at us for somehow getting stuck. So, then we just sat at the top of the rock. Just waiting to see those bright jeep headlights over the sagebrush.

When he got to the part of the road we were on, he told us that a guy found a really big rattlesnake and completely freaked out. So, we hopped in the jeep and were going to our car. It took about 10 minutes to get to the car, when we got to the it was about the same. Except I thought the car would float away, and we would never see it again. Anyways, he connected rope to the trailer puller thing, and pulled it out so fast, it was crazy how fast it took. It maybe took 4 seconds.

So this was the story about being on a big ranch, and somehow getting stuck in a super shallow river.  And then going through three hills, and finally getting to the last one to find a pretty good picture of a tree. 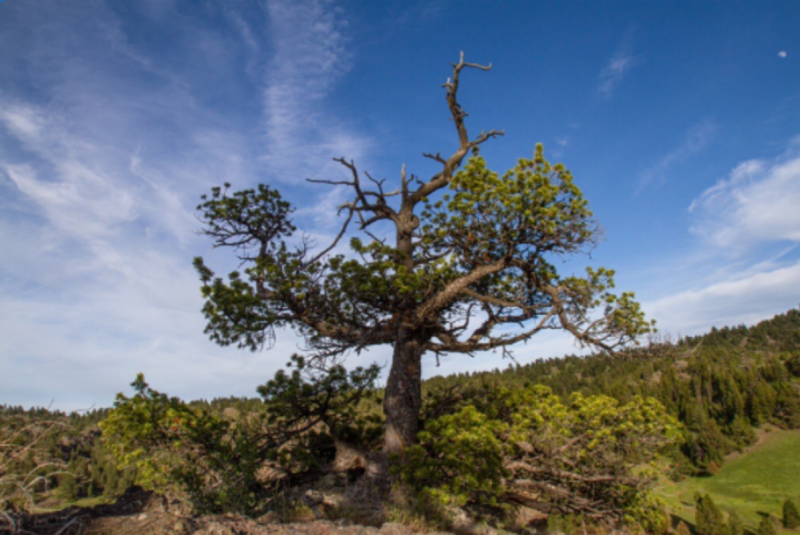