It was across Helena Middle school at RB’s drive in with two best friends, Brock and Cooper, Cooper is the closest to me because of how long we have had a friendship. Brock only met me this year, but it feels like I have known him for years, as I wait outside, I see them both striding towards me, we cross the street as looking both ways. We arrived and we looked at the menu, then decided to get two vanilla milkshakes and one chocolate, there is a microphone right by the menu, which is where you order, as they are recording our order, we are struggling to count the wad of cash in our hands. The total went out to eleven dollars, but I decided to pay for everything considering I was the one with the twenty-dollar bill. We handed them the money and we grabbed our stuff and went to a part of the drive in where there is seating, we put our things down and sat and talked, they called our name, and we went to the other side of the place.

The man who took our order gave us the milkshakes as we thank him and are on our way, he says one more thing. He says, “Did you know an 80-year-old made your milkshakes!” As he said that a woman came out of the door. She talked to us about her life and asked us how school was going for us and as we talked to her for about 20 minutes, drinking our milkshakes. It made me think about how long some people do the things they like to do and how you can do whatever you want no matter what or who you are. As the conversation was going, we started talking about the bomb that was near our school, later that day we had to go in lockdown because somebody thought there was a bomb on a school playground not far away, so we spent most of our time in the classroom we were in. After we were done talking, we had mostly finished our Milkshakes, we sat on a bench and took some pictures so we could remember the fun moments we had that day.

After we finished up Brock walked back to the school because his sister was having a basketball game, so he had to go back, and Cooper and I were going to get picked up by my sister once she got off of school. Cooper and I waited a little bit then my sister got to the drive in, and we got in her car and drove to our house. Cooper was only going to stay for an hour because her mom had work, so she had to pick her up later.

We went up to my room and Cooper showed me some pictures on her phone but then we decided to do something outside since it was nice out. We have a red car in our garage, that is a mustang. It is a small car for little kids that we have had for a long time, at first it was my sisters because she and my other sister got one when they were 6 and 8 and I was only one. We used to have a pink princess one, but it had stopped working a long time ago, so we had to throw it away, we got the cars from our grandma and Grandpa who have also got us small four wheelers one time, but I was still super young, so it was just my sisters who have gotten one.

Cooper wanted to ride in the red car that barely had any battery left, so we took it out of the garage and put it on our huge, long black driveway it’s the biggest driveway in our neighborhood, so it holds lots of things like the camper we have and lots of cars we have, my dad likes to work on cars in his free time it is kind of like his hobby so he buys some old trucks from the 70’s and works on them so he usually has three trucks in all because we have a big one to pull the camper, a small one he just drives around and one he is working on, then we have my mom's car which is usually in the garage and my sisters car she takes to school and if my other sister is visiting from college then she will bring her car. I also use the driveway for basketball since when we bought the house it came with a basketball hoop attached to the garage.

Cooper got in the car right away and she handed me her phone so I can take pictures of her, whenever she wants a picture or video taken of her, she always gives me the phone because she thinks I am good with the camera. She drove the car down the driveway as I was running in front of it trying to get the best shot of her, but she could barely control the car, so she just drove it onto the grass by accident, I wanted a turn to try to get the best shot, so she took the camera and I was in the car, but it didn’t really work.

It reminded me of the first time we hung out which was in 3rd grade after we had met because we were in the same math class we had never been in the same main class until 5th grade, so we did not know each other that much but then we started to play at recess then we set a playdate at the exploration works downtown, we rode the Carousel and went to an ice cream place near there. After that her mom showed up and picked her up right after we put the car away because she texted us and told us she was close to my house. 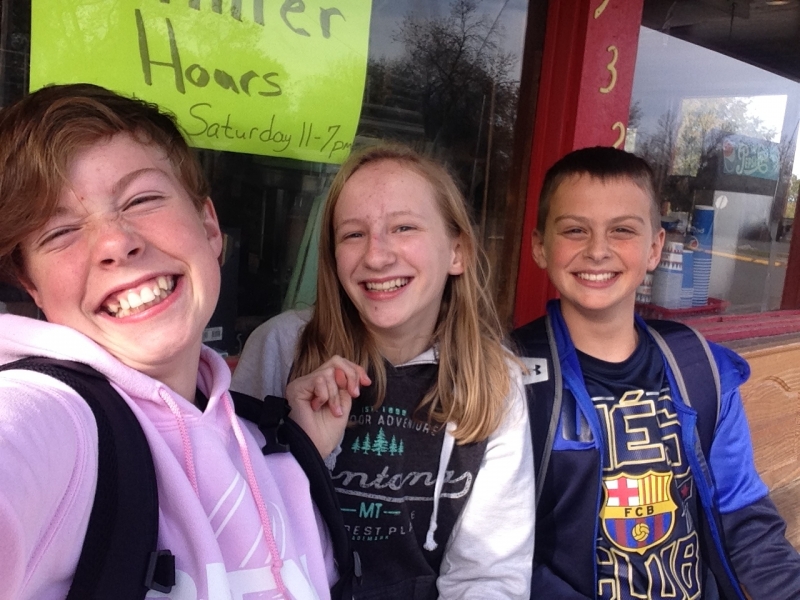