This was a very fun day. My family and I went to a local park area, which we nicknamed, “Margaret’s Park,” simply because my Great Aunt Margaret lives across the street from the park. Anyways, we went to the park that day because my grandparents decided that they weren’t getting enough exercise at home and wanted to exercise more. And they invited us to join, and this is where the story starts.

We walked all the way from our house (which is about 2 miles away) and we went to the park. We arrived there, and funnily enough my grandparents, (going by car) arrived two minutes after us. They pulled up and were ecstatic to see us (my family) and we talked for a while, and then walked around the park. During the walk, my family and I talked about various things, and then, around the fourth lap around the park, our dog started to want to play fetch with us. He began jumping up and down in a playful fashion, and of course we obliged to play. So, we began throwing the ball as far as we could, and he bolted after so fast, the grass swayed at how fast he went. He jumped up and caught it and kept coming back to us. We threw it 20 more times, and we could tell he was getting tired, but he kept on coming back to us.

Meanwhile, our grandparents, aunt, great aunt, and their dogs kept on walking the perimeter around the park, talking amongst themselves and overall having a great time. The park was beautiful this day, it was bright and sunny out, the grass was lush and green, and the playground sparkled in the morning light. It was the perfect temperature, so we didn’t even need the coats we brought along with us.

I continued walking the park, except I split away from the group for a little bit, running around with my dog. We ran for a good 7 minutes, I’d say, and then we had to take a little break because my dog was getting tired. We almost ran into a ditch, where we stopped, and realized what we almost did. We had almost fell in. It was about 12 feet deep and you would not be able to climb up. After that incident, we kept walking until I came to the group again.

We continued walking, and we had a lot of fun. We talked about many things such as summer, school, and going golfing, as we all wanted to do that sometime in the future. My Great Aunt Margaret brought out lemonade for all of us to enjoy, and we talked some more.

Then, my brother and I played a game of tag around the park, and my dog decided to join in, and chased us around. (Playfully, of course.)

Evan, my brother, asked my mom if we could ride bikes around, and she said yes. So, we rode around the streets and the park, (always being cautious of course) and had lots of fun.

We then had another break and socialized with our family. We again talked about golf again, but also about how happy we would be once COVID-19 had settled down. We talked about how we would go places again, see people again, and not feel confined in our own homes from this terrible virus. But until that time, we would have to wear masks and social distance in order to make sure we could all stay safe.

Evan and I got up again and started to converse enthusiastically about the new puppy we planned on getting later this year. Her name would be Ooda, which is an acronym from the military. Its basis is around decision making. It stands for Observe, Orient, Decide, Act, which my parents liked, and wanted to name our next dog’s name.

Then we talked about how we wanted to go to a movie theater and see a movie, but we knew we couldn’t due to COVID complications. At this point, my grandparents, aunt, great aunt, and their dogs decided that they would call it a day, as they were getting tired. We bid them farewell, but not before taking the picture seen above.

We started to head back home on our bikes, and we were cruising down the road. We went uphill and downhill, but I didn’t stop anywhere along the ride. I stayed on my bike the entire way, pedaling hard, gaining speed, and going fast. I loved the feeling of air rushing past my face, my hair flying in the wind as I went down the street. My brother and I biked to my house, and up our driveway.

But we weren’t done then. My brother and I continued to bike, we biked up the entirety of the street we live on (it was very steep) and then up a sidewalk at the top of the road. We then continued biking, until we came to a trail that we took. It was very scenic. There were all types of wildlife flourishing, and many beautiful flowers blooming. The trail was however, very rocky. That didn’t matter all that much though. We biked for another 30 minutes maybe, and then we rode down the trail. We rushed past trees, flowers, and bushes, all while the sun was shining down on us. We biked back down the trail, down the sidewalk, and cruised down the street.

We arrived at home. We felt that we had a very successful day, because during this time, we didn’t really get to see our grandparents very much. We loved to see them and that is why we went that day. With our day finished, and everything we wanted to complete done, we headed back into our house, up our stairs, through our hallway, into the kitchen, sat down in the living room, and talked about the days to come, and how we would plan to see our family again. 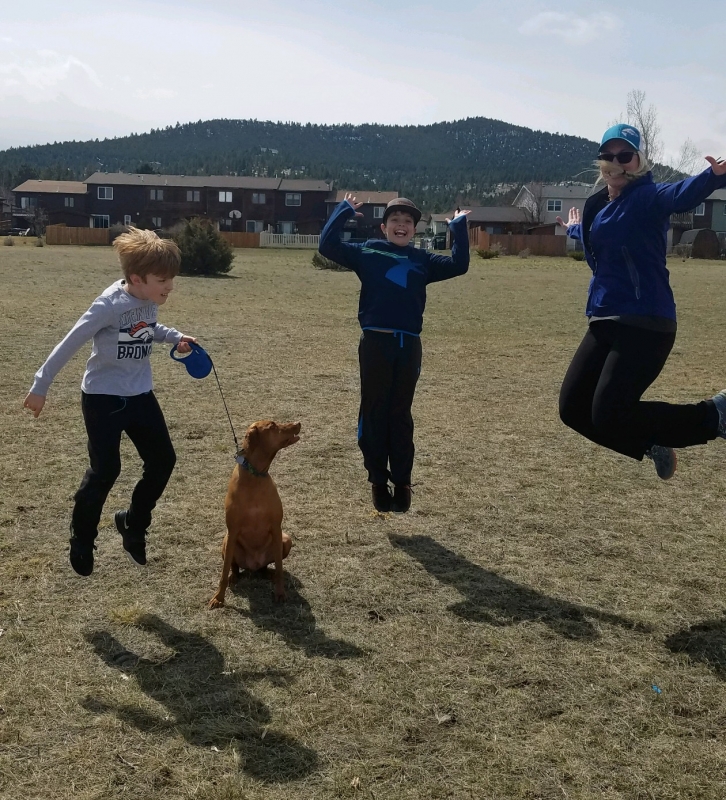