The big thing I had to contend with was who I was, or who I thought I was, was in relation to buying "things". There was a release or temporary satisfaction that came from going out and buying a coffee. Sitting in Starbucks, with my earbuds in, typing away. Setting a timer for 15 minutes. Getting the gears of the cognitive machinery lubricated with caffeine and sugar and then letting them rip. Trying to capture something that seemed exciting on the page, that was a screen, in reality.

Every few days, I needed to spend money. Drive further away. Take bigger risks. Release more serotonin. See different things through my eyes, smell different odors. Hear new sounds that the algorithms had chosen for me, from the previous day's data collection. A bookshelf, a table for the kitchen, a shovel, new balls to throw for my dog, a small cup with rubber bristles to dip his paws in when he came in from outside, so the floor didn't get muddy. You know, essentials.

Time collapsed. "I think I talked to him yesterday or was that two weeks ago? What day is it today?" I really missed The NBA and that fact itself made me sad. So I watched a documentary on Michael Vick. When I told people, they, in turn, got mad at me. "Fuck Michael Vick. He's a dog killer.” But you don't understand how he grew up....and....he's a changed man. The outrage was outsized for him.

Eric Garner was a young man walking back from the store where he had bought some candy. Then he was walking home and eating that candy with his hood on. Do you know how many times I have done this exact same thing? Just like Pearl Jam, I'm still alive.

The irritability moved in the room insidiously, like the thought of a drink. It was there. Fully present before I even noticed. Everything made me mad. The schedule of the day. The lack of the schedule for the day. Taking a trip. Not taking a trip.

I zoomed everything. Meetings, meditation sits, charades with my family in other parts of the country. Soon I couldn't sit still for 10 minutes in these meetings. I would stand up. Strum my guitar. Check my email. Check Google News. Check Marginal Revolution. Check Helen Branswell's Twitter feed.

Then I understood. Because I listened to others. This was anxiety. Meet the new boss. Same as the old boss. But in this case, I did get fooled again.

Ted Gioia tweeted that Thelonious Monk's 1968 album, Underground, was the best jazz album of all time. Come again? Suddenly, I felt like my claim that I had found the world's best pizza in 2018 in Sofia, Bulgaria had legs. The pizza was made by three Turkish brothers. One took the money, one was rolling dough, and the other was putting the finishing touches on the pizza. It tasted like magic, Turkish magic. I've had a lot of pizza, this was the best.

On Thursday, I woke up with this irritability and decided today I would read Haruki Murakami's Killing Commendatore from start to finish. Seemed reasonable. 680 pages. I set a timer for a half-hour. I read 20 pages. Maybe not the whole thing today. 80 pages should take me 4 hours. That seemed reasonable. Like a true fanatic, I borrowed the audiobook from the library through the Libby app, so I could be all Murakami, all the time.

I jumped in headfirst. When he mentioned music, I got it on Spotify and listened to it. Strauss concerto for Oboe. The first three songs from Sheryl Crow's first album (Tuesday Night Music Club), more Monk, Monk's Music (sorry Ted I prefer this to Underground, but like pizza both are just fuckin' great.) My secret in life at the middle mark is that I just inhabit the minds of the characters in the books I read because I find it entertaining.

Like the narrator, I woke. I drank black coffee. I drank mineral water. I read. I walked. I listened. No more Google News. No more New York Times. No more podcasts. The theory was true. If anything worth a shit happened, somebody told me. I was free to walk in a world of stillness.

By the second week of this, I was telling the people I spoke with on the phone that I was, "Doing all the things I never had the time to do during my normal day to day life." I worked through JavaScript lessons with Sadie. I built things out of Legos. I read policy papers on a framework for 21st Century Skills, The Four C's (Communication, Collaboration, Creativity, Critical Thinking). I emailed my colleagues in Bulgaria, Denver, New York City, Kazakhstan.

Just before I entered the woods I passed by some houses. At the end of the driveway of one, there was a flower pot with some Rosemary. On the pot a was a piece of cardboard with the following written:

"Help Yourself to Some Rosemary. Put it in a vase of water. It should take root + then you can plant it in your garden."

The Buddha said to take a breath, just one breath. A big, deep breath.  All the way in and all the way out. Now you share this part of the world with all the world. And so you are one with this world and this world is one with you.

I'm kidding. The Buddha didn't say that. I did. But you would agree it sounds like something he would say, right? 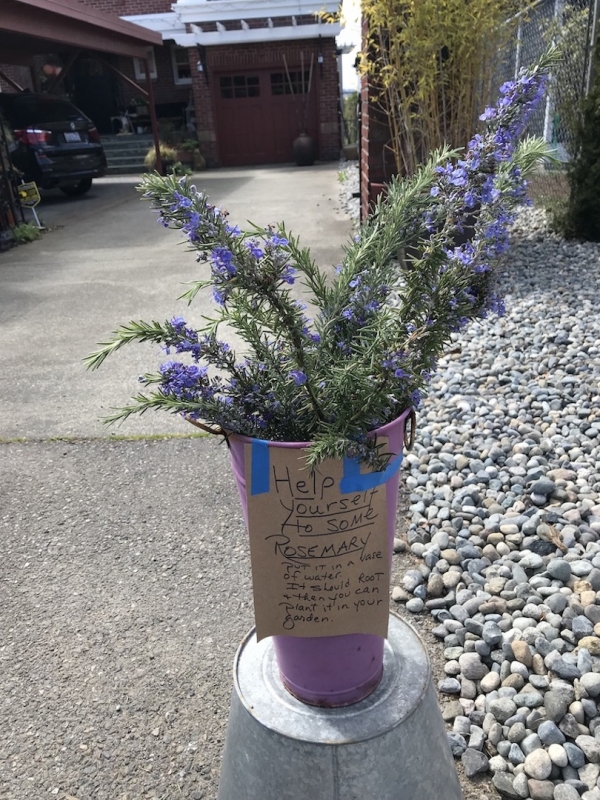