My best friend Greta was German, like me. Her mom was German and her dad was American, just like mine. I was jealous of her in a way that made me feel guilty. I tried harder to be a better friend.

She wore dresses either handmade by her mother, or straight from a German catalog. I wore hand-me-downs from my sisters, or hand-me-downs from my German cousins. Her German-ness was fresh, mine felt second hand. She had blue eyes, like mine, but they weren’t “lazy: or hidden behind thick framed glasses. Her hair was almost white — a dazzling blonde that fell in ringlets to her shoulders. Mine was stringy and straight, a ragged short bobbed home trim called the “Dorothy Hamel.” The style was named after a famous ice skater whose talent could pull off a bad haircut better than me. My hair, once also a tow-headed blond, was starting to turn dark. I was called a “dirty blonde” which always seemed to be said with a sneer instead of a smile. I imagined dirty dishes in a sink of warm soapy water. At the age of 7 whenever I washed my hair I expected  a piece of dried egg or crumb of toast to fall out of it.

As much as I was jealous of my friend, I loved her. She was the kind of girl people liked not just because she was pretty and kind, but made us feel special just knowing her. I was not as pretty or kind. I was fidgety and loud, with thick smudged glasses. I had frequent bouts of rage; frustration that resulted in flung books or papers, toys and shoes. I was always sorry, vowed to become calmer, kinder, sweeter, prettier. More like Greta. She emanated warmth. We were all drawn to her like planets who circle a star.

She didn't know she was pretty, or if she did, she didn’t manipulate people because of it. Everyone wanted to be her best friend but somehow I was the one she picked to have that title. I wore it like a crown. I was Greta’s BEST FRIEND. We sat on the swings together at recess. We discussed whether Princess Lea really knew how to shoot a blaster and if she liked kissing Han Solo. We decided we both liked black licorice no matter what anyone else said and agreed German chocolate was best. We spoke to each other with German phrases mixed in with our Dakota slang, like twins who share their own secret language. We counted VW beetles as they sputtered by our school, waiting for her mother to pick her up in their own gasping Volkswagen. “Slug bug!” We would scream as we punched each other in the arm, rubbing our shoulders and laughing as she swung her German leather school bag over her shoulder.  She would look back at me, smile and wave as she climbed cheerfully into her mother’s idling car. They rattled off, exhaust mingling with the smell of lilac that grew up the terra-cotta bricks along the facade of our school.  We were school sisters and pinky swear best friends.

Over Christmas break my family went to Germany. I didn’t talk to Greta those weeks we were gone. I was excited to share my gifts of German chocolate and licorice with my friend. I wanted to show her the new dress I got because It reminded me of one her mother had made. It was blue with spatterings of small cornflowers. It had poofy short white sleeves, too short and thin to wear in January in North Dakota, but I insisted on wearing it anyway. I couldn’t wait to return to school.

Greta wasn’t back at school, though. Her chair sat vacant in the classroom — heavy with emptiness, as big as the lump in my throat. After lunch, which I spent by myself chewing more on my fingernails than the hot lunch in the melamine tray, our principal came into our room. He looked somber, which scared me. He whispered to our teacher who suddenly looked stricken. This also scared me. I immediately longed for my mother. Our teacher walked briskly out of the room behind the principal. They left us unattended. We were shocked, rendered mute. No one had ever left us unattended in the classroom before. Something terrible was happening. The suspense was going to burst my chest. My hands started to sweat. My eyes began to fill with tears. I didn’t know what was going on, but the feeling of tragedy already filled my lungs making me afraid to breathe, as if exhaling would spread this terrible feeling, still unnamed.

Our teacher came back into the room looking pale, shaken and now, also red eyed.  I needed her to tell us what was happening. I wanted to go home.  She shakily cleared her throat.

“Class, I have upsetting news. Greta will not be back to school. She was in a roll over car accident with her mother last night. Her mother was killed.”

We were once again silent. Everyone looked at me. I was as speechless as they.  My ally, my friend who didn’t care if I wore glasses or hand me downs, who was both as different as me as a cow is from a sheep, and same-same, like twins separated at birth, may as well have died that day, too. The thought of losing my mother like Greta had, and also potentially losing my friend, was more than I could take.  My tears spilled over. The unknown feeling in my chest now had a name. I was allowed to go home to my mother.

When I got there I dropped my bike on the driveway instead of parking it in the garage. I slammed the door, instead of closing it softly. My mother met me at the top of the stairs. She didn't say a word. She looked like she had been crying, too.

I wasn't jealous of Greta, anymore. 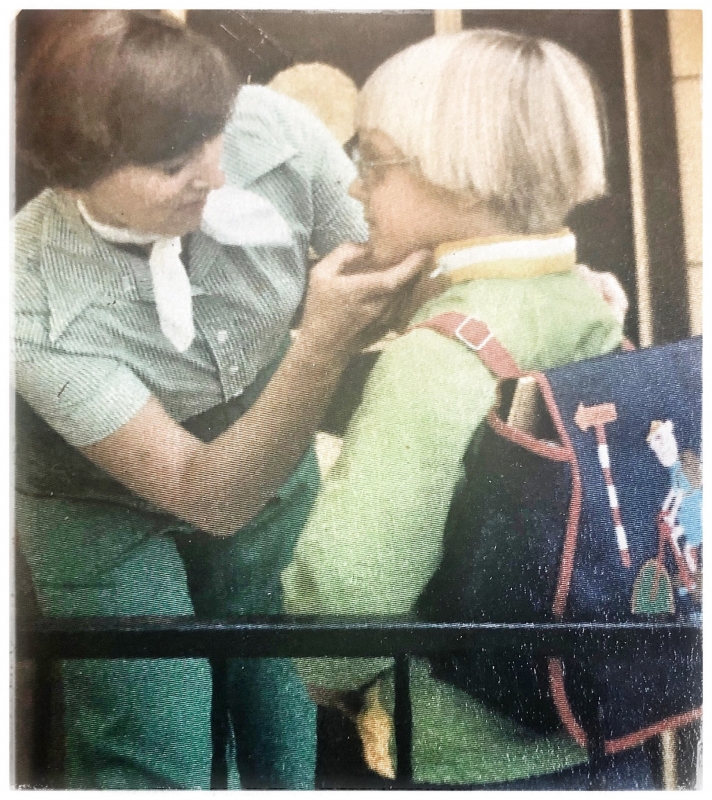