Don’t let this neatly attired, dapper-looking man fool you. He was happiest when his hands were in the dirt, and his body was covered in sweat after tending the land and his creatures on it.

He was born in 1917. He was one of eventually 10 siblings. He grew up in extreme poverty, leaving scars he never wanted to talk about. He was the first in his family to graduate high school - he was so proud, and they were, too.

Because jobs were difficult to find in the Great Depression, he joined the Civilian Conservation Corp and provided manual labor digging ditches wherever they were needed, and did his part to help develop natural resources. From there he went on to serve in the army, and eventually became the Chief of Medical Administration at the Veterans Administration in Sioux Falls, South Dakota.

While in the army, he met my mother at a dance hall. Servicemen could buy a ticket for a dime, and after dancing with Mom, he bought a lot of tickets. They married, and raised 7 children together.

To Mom, image was crucial. So she dressed Dad to the nines. She had his suits custom made (going well beyond the family budget to do so). His ties were always silk. His shirts were starched to stand up on their own. Every day he went to work, everything he wore was coordinated by her. He couldn’t leave the house without a mirror-like gleam on his shoes. According to Mom, you could tell a lot about a man by looking at his shoes. She wanted, needed Dad to be shiny.

Everywhere he lived he had to be connected to nature, to the earth, to animals. I think a lot of his motivation came from early childhood hunger, and not wanting the family he was creating to experience that trauma. So he always had a garden, and we filled our bellies on the fresh in-season bounty from those small patches of ground.

He was also motivated by the miracles coming from the seeds. I think it was his connection to something larger than him. He loved anything that grew - us, his garden, his flowers.

When I was about 7 years old, Dad moved Mom and 7 kids onto a large acreage he rented. To Dad and us kids, it was Heaven ... but to our city girl Mom, it was a never ending hell.

Part of the rental agreement was that Dad would take care of the landlord’s cows and pigs remaining on the property. We could have any extra animals that could reside comfortably with said cows and pigs. Dad had a particular affinity for fowl - so we had large flocks of chickens and geese - eggs and meat were prolific. The flock of Guinea fowl was our security system - any time anyone drove on the property, we were alerted by their unique screeching sound. Dad kept Bantam chickens just because they were cute. If a hen quit laying, Dad would finish the hatch in the oven in the kitchen. Mom quickly learned to open the oven and peek inside before turning it on, just to make sure there wasn’t anything alive in there.

We dressed piglets in our doll clothes. We raised a goose in a bird cage. We kept kittens in our dresser drawers. My brother’s dog, Ginger, had a litter of puppies on his bed. The house cat was trained to do her business over the bathtub drain. We swung from the rafters in the barn. We played hide and seek in the chicken coop. We climbed to the top of the windmill where I swear you could see the curve of the earth. Dad was in his glory over it all. Mom couldn’t wait to get out of there.

So we did. We moved into town, into civilization. It made Mom happier, which in turn, probably saved our lives. But I remember sadness and anger in the transition to that next house away from the farm. My oldest brother left for the navy at 17, Dad signing the papers to give permission so my mom would have one less child to be angry about. Maybe she was happier ... but the light in Dad’s eyes was dimmer in that house.

It wasn’t long before he itched for more space. The negotiations ensued and a deal was struck. They decided to build a house just outside the city limits. She could pick all the new things required to keep her satisfied - and he could have a yard big enough for a garden and as many flower beds as he desired. No fauna this time, just flora.

I remember moving in to this brand new house. The house was nice ... but oh, that farm house. I missed it - the two stories, the huge front porch, that ready access to animals and dirt. Mom hated dirt - hated us sometimes for getting dirty. But I think she knew as long as we lived on the farm, she would be defeated in the battle between dirty and clean. With this house, she had a fresh start with an intention to keep everything spotless.

Mom had no power over Dad’s gardens. We didn’t live there long before the newly sodded back yard had a large rectangle of bare earth being prepped for the plants and seeds. The house was designed with a large planter in front where Dad grew magnificent petunias - word got around about these petunias, and people would come out from the city to drive by for an awestruck peek at them. And the produce from the vegetable garden! The corn we ate, the tomatoes we devoured, the fresh cucumbers we sliced and pickled ... they sustained us.

His love came through his gardens, into our bodies, so we could grow, too. Well done, Farmer Dad. 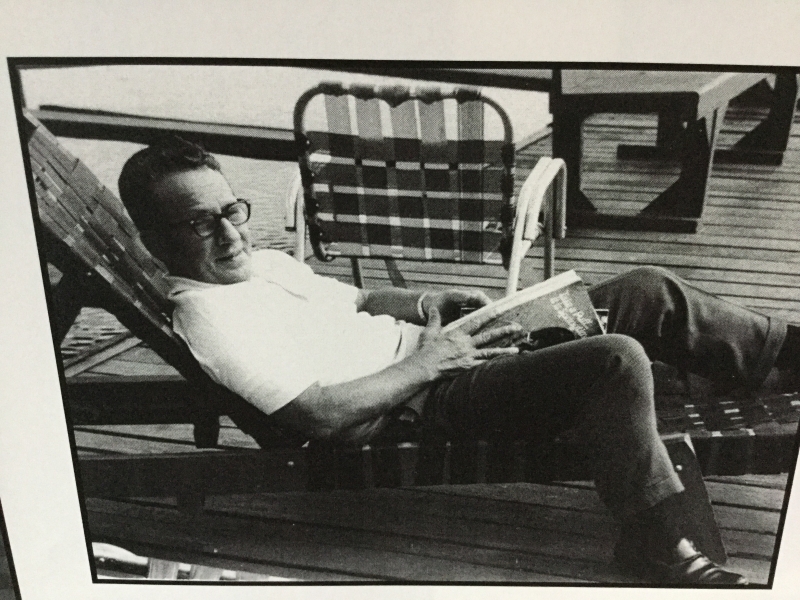