During my second stay at La Casa, I learned that the secondary (middle/high school) teacher would be off my last Thursday, Monday, and Tuesday.  I would be leaving Thursday.  I asked if I could jump in and work with the kids while he was gone, using this Project 1:1000 thing I had shown him during my visit there a month earlier.  He agreed.

The first day of the first Project 1:1000 Session was Thursday, October 29, 2021.  I met with the students at 12pm.  I opened up the website on my laptop, which was connected to a rather impressive, perhaps 40-45” mounted television.  I showed the picture and read the corresponding text of what would become the first “Submission” (1 picture + 1000 words), the basis of Project 1:1000, entitled The Boy in the Casbah.  It deals with my visit to Tangier, Morocco with my father in December 2002.  It gives context to the picture, the surroundings, my life and the picture’s place in it, who I was before and who I was after the image, and what was in my head and my heart along the way.

After I was done reading, I gave them a brief tour of the website.  We would not be meeting tomorrow, but I gave them their assignment for Monday, that they should bring at least one personal photo about which they might be able to write 1000 words.  I gave no further direction.

The next day, I wrote a Privacy Policy for all residents, visitors, and volunteers at La Casa.  And that weekend, I was mostly in bed with some wort if stomach bug.  The girls in the kitchen told me to stay away from dairy products, and gave me lemon juice and salt as well as te de manzanillo (chamomile tea) to soothe my stomach.

On Monday, only one of 5-6 students showed up with her picture selected.  I applauded her and asked why she had chosen it.  She said it was her arm that was extending into the frame, the hospital bracelet of her mother, who had just survived a rather gnarly medical scare, in her daughter’s hand.  The student had prayed in the same hospital chapel that was also in the frame.

I told her that the picture was perfect, that there was a lot to work with.  Soon after our discussion ended, the rest of the students had their pictures selected.

I then showed them a picture of a former resident of La Casa from Venezuela, who I had helped find a new sponsor and home outside of Billings, Montana.  I had put him on a bus in Tucson, bound for Denver, three weeks earlier, and this was a picture of him at the dinner table surrounded by new friends in Casper, Wyoming.

I asked what questions the students had about the photo and took notes on the board: What are they doing, eating? Who made dinner? Who/what is in picture?  Where are they? Who took the photo? What was the weather like? What happened before? What happened after? What is outside the frame?

One student piped up with, “Why did you take the picture?”  The fundamental simplicity staggered me.  I applauded and suggested that they ask themselves and share that which is unknowable from the picture itself.

I asked the students to write for a few minutes about their picture with these questions in mind.  At the end of that time, I told them to write down and cover up how many words they really thought they could write for tomorrow.  Some went low, but the others averaged around 200.  I asked all of them to bring 250 words to class the next day.

Only two students would do this, and there was a girl in class I hadn’t seen.  I had the rest of the students explain the assignment to her, including a recounting of the questions we had discussed.  We talked about using them as a springboard, the facts, maybe at the beginning of the story.  But at some point, we must enter the picture, go down rabbit holes. "You are the guide that will lead people into the real story of the photo."

I asked if either of the girls wanted to share what they’d written.  The one who had brought her picture the previous day went first.  She brought us back into that chapel, where she was “…thanking God and the Virgin [Guadalupe] for the great miracle they had brought into [their] lives.”

Class was from 12-1pm that day, and I gave the students the option to leave or remain there writing, if they wanted.  Not a single one left.  They all remained there writing until 1:30pm.  I nearly wept.  It was working.  All they need is a guide and a path.  A place.

The regular teacher was back the next day.  I popped in at the end of his class and asked the students where they were at with their writings.  They were close enough for me to remind them that I was leaving the next day, and that we would be doing a presentation that night.

“For everybody,” I said, which they didn’t much like.  I relented and said that their families had to be there, and they could invite anyone else they wanted.

On Wednesday, November 3, 2021, the first Presentation of the first Project 1:1000 Session took place in front of a small crowd of family and friends at a refugee shelter in Nogales, Mexico.  The other students’ Submissions dealt with a get-together/singalong with gringo visitors, one boy’s journey from Guatemala to the shelter, Mexican Independence Day, and the hope/resilience found in the sky.  These warriors, these survivors, these good students made me so, so proud.  They were nervous and awkward and courageous and beautiful.  They were my heroes.

The first Session couldn’t have been less likely.  Or more perfect. 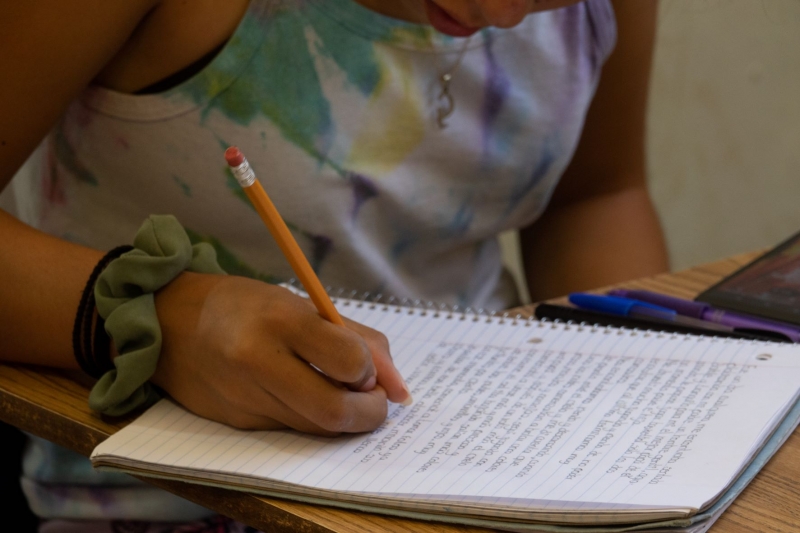