This weekend I will never forget. For most of that week (meaning Wednesday, Thursday, Friday, Saturday, and Sunday), We went camping with some of my family friends, Josie is the one on my back looking like she is getting her soul token over by a carrot. My dad is the one in the background with a bright yellow shirt and a hat. The person with grey shirts and gloves coming out of his pocket is Josie’s dad. Then my mom is behind the camera. Josies mom Crystal is taking pictures of Josies brother Jeren and then their family friends Sherry and Mike are eating and their kids Kayla and... are riding around. Wednesday night we came up to our campsite and we just hung out with our friends. On Thursday, we got up around 8 to get ready for out four-wheeling drive. We had breakfast then we packed up the four-wheeler for our ride. That day we went on a four-wheeling trip up the mountains. We went on a 20-minute ride first, and our first stop was at a lake and their where some hug frogs and we tried to catch them, but I didn't want to catch them because frogs are weird want, they were slimy. There was one spot that we stopped at and it was at the top of a mountain, it was very flat and had tall itchy grass. We stopped to eat some lunch, and everyone checked their phones to make sure nothing bad happened when we were gone.

From the top of the mountain, we saw the little town of Elkhorn. The teen boys decide to go on a jump with all the bumps in the road. My brother's four-wheeler is small and when he went on, he jumped he went far up in the air. After we were done with lunch and checked our phones, we headed up the hill and we the mountain and there were some big rocks and a steep hill.  Most of the kids gt out of the four-wheeling and let the adults take the four-wheelers up the hill/rocks. Me and josie where in her side by side with her parents, while my mom and dad where ridding together, my brother by his-self Josies brother Jeren was by his-self and Sherry and mike were on 2 separate four healers and their kids Kayla and Kaleb Were on their four-wheelers too. We had 11 four-wheelers and 1 side-by-side. There were a lot of people and a lot of four-wheelers. I got to drive my dad's four-wheeler, but only for a little bit but it was fun, I liked it when I got to drive the four-wheelers. When we got back to the campsite, we sat around the camp and built a fire that night and we got to tell stories and stuff which is fun, and my mom told a lot of stories about when she was a child and all the stupid things she did with her brother. Me and Josie went to take pictures on the trailer when it was dark. That night for dinner we got to make tacos in a bag, and you have a bag of Doritos and you just put taco stuff in the bag, and then my brother made some dessert for us. I can't remember what it was called but it was good.

Saturday, we got to go on another ride, and it was to an abandoned mining shack when we got up to the top of the hill there was two building one of the buildings was of the building where there was a big machine that pulled mine cart from one mountain to the other. The other building was for pulling a cart in the air from one mountain to the other. then there was this cool not really a building, but it was like a light house kind of with no top there was four sticks like coming out of the ground kind of (I don't know it's kind of hard to explain) but we dropped rocks down in the hole to see how far down mine went. we left the mining area, and we went down this big Hill and though rocks almost as big as the four Wheelers so everybody got off the four Wheelers And let my dad and Jesse (which is josie's dad) move the four Wheelers down the Hill so nobody would get hurt. After that we stopped to have some lunch and the boys decided to go shooting in the girls I decided to wander. We found this big cabin and it was huge for how small cabins were back then. It took us so long to get back to our campsite, but once we got back, we had to pack up our camp sites for the next morning.

Sunday morning, we had to get up around 8:00 again but I didn't get up around 9:30. When I got up, I had to help pack, but I just hung out with Josies and tried to procrastinate us leaving. Eventually we had to leave so we hooked up the camper to our truck, said our goodbyes and told everyone thank you for having us. We left always remembering this trip. 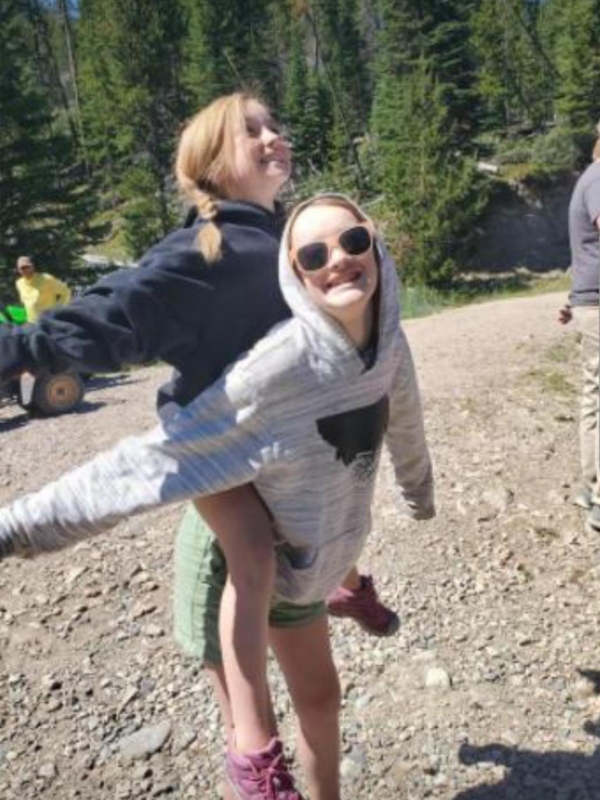