A man was wandering through the neighborhood, the pony in tow, looking for an opportunity to take a sweet photo.  And increase the possibility this sweet photo would translate into additional income.  My parents bit.  My brother, Felix, has my back on this pony.

I was the first girl, born into a family with three older brothers.  The youngest of the three brothers was five years older then me.  Felix was 8 years older.  My mother thought she was through having kids until I came along ... the first of the second set of four kids in the family.  Total, when all said and done, of seven kids.  But I was the first girl, after three rowdy boys.  And they ... all three of them ... especially Felix ... were at my back, encouraging me in significant ways I would not appreciate until I was grown.

Felix took that first born position very seriously.  What he said was law.  He protected all of us of from any negative attention, be it verbal or physical, from outsiders.  But he brutalized us on the inside.  I was both in awe of him, and terrified of him.  He would defend me in violent ways.  He would also criticize me in violent ways.

He was an angry kid, getting into trouble in school for bullying, for fighting, for his incessantly disrespectful mouth.  He got into trouble at home for the same reasons.  The war was between him and our mother.  He bashed her with words.  She bashed him with her fists and switches cut from a tree - sometimes sending him back two and three times for a switch with just the right dimension, just the right sound it made as she sent it toward her target.  My father exhausted himself trying to keep the peace.  Trying to put the woman he married first, trying to understand why Felix was so adept at fanning the constantly glowing embers of her fire, trying to temper their tempers.  He gave up when he signed the papers for Felix to join the Navy at 17 ... his only way to protect his son while loving his wife.  His only way to achieve peace in the turbulent household.

Felix married, had four children of his own.  He abandoned that family, and moved to California, where he established a new love relationship, as well as a relationship with her family.  While in California, he decided to take a deep dive inside, to try it figure out why he was such an angry person, why his psychology was constantly affecting his physiology.  His therapist suggested he write a letter, saying all the things he needed, wanted to say to our mother.  The therapist never suggested he send it to her ... in fact she warned against it ... but he did.  The letter included information about me, shared in confidence with my brother, about my mother’s father.  My mother’s words to me, through a sister, after she received the letter:  “Tell her to never darken my door again.”  I was disowned, abandoned.  For being truthful, for sharing information in confidence with someone I trusted.  He apologized, and I forgave him.  I was at his back.

My father died, then my mother, and it was revealed by her sister that Felix was not my father’s son.  He was a product of my mother’s first marriage - to a man who ended up in prison for robbery and assault.  This was new information revealing much about our mother.  She carried so much shame and anger ... and secrecy.  A burden she could have shared with all of us, who would have rejoiced at the opportunity to see her as a human, instead of the mother on the pedestal she always needed to be.  My father married my mother when Felix was an infant, adopted Felix, and never treated him any differently than he treated his flesh-and-blood children.

Because I was familiar with the pain of abandonment, I made a commitment to love my brother no matter what.  He was family.  We had each others’ backs.

He had every opportunity, many times throughout the years,  to be other than he was - a person humbled and sorry for mistreatment of people he loved and humanity in general.  And I thought he was in the process of becoming that person.  I saw glimpses of that person.  However, I realized quickly those precious glimpses of a contrite brother were fleeting.

He treated wait staff, store clerks, others in the service industry with impatience, disregard, disrespect, disdain.  He had no filter with regard to profanity or context around children, and when called out about that his response was that he “didn’t give a shit.”  He brutalized and made fun of the closest of his relatives, appearing to regard only those who he was with at the time with any modicum of respect, and that was made false by future conversations.  I discovered, through conversations with a family member, he had beaten his children and his wife because that was how he was treated.  He chose to continue the cycle of his abuse.

Still, I loved him.  Because I was privy to the origin of all of this.  I knew how, why, he was broken.  What I didn’t know at the time, and what I know now, is that in spite of all of that, I had the right to protect myself from the power and influence of a bully.  I had the right to be at my own back.  I could love him from a distance, while not having him in my life.

He passed recently - peacefully, 6 months after a terminal cancer diagnosis.  He’s on to his next adventure, whatever that adventure might be.  I have conversations with him now that I was never able to have with him while he was alive.  Instead of disagreeing, defending, arguing ... I am certain he is listening.  Because now he really, truly, is at my back. 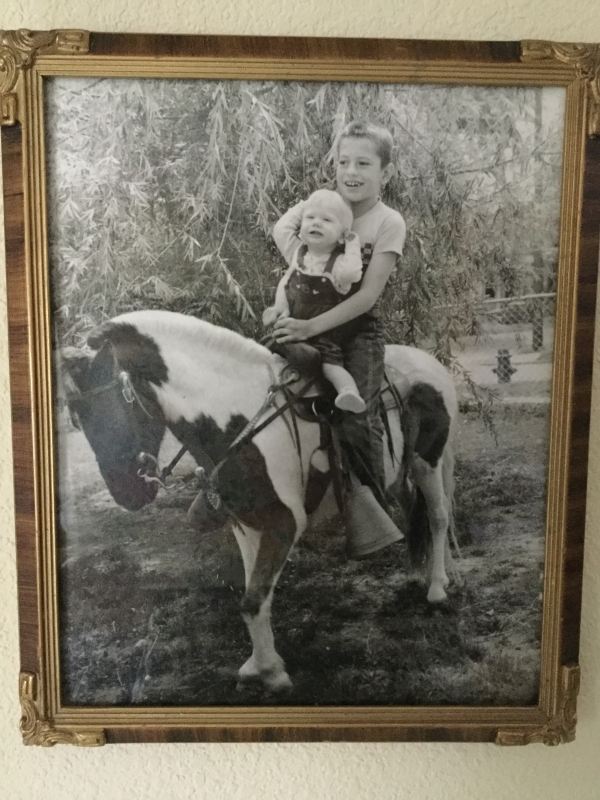 SUBMISSION TITLE
At my back ...