Jim Morrison was the lead singer of The Doors.  He was poetic, anti-establishment, and seemed to possess a great disdain for reality.  He was a hero of mine, and for about five years, I was bold and high enough to loosely, periodically believe that I might be some sort of reincarnation.  I was certainly on track to make it into the 27 Club.

Morrison spoke and sang (in “Peace Frog” on Morrison Hotel and again on An American Prayer) about coming upon a terrible car crash in New Mexico as a child.  He witnessed the carnage and agony of a truckload of Native Americans that had overturned, and swore that he could sense the soul of the one of the recently departed leap into his body, adding later that “…he’s still there.”

Who am I to say?  I don’t know.  No one alive knows how this all works.  But it does stand to reason.  Morrison certainly did seem possessed.

If this was indeed true, and these sorts of things could indeed happen, then those closest to the crash sites of 9/11 could perhaps be similarly affected.  Souls released, screaming, floating to the ground as each plane struck the tall towers of the World Trade Center.  Souls released, confused, wandering the halls of the Pentagon.  Souls released, lost, weeping in the woods of Pennsylvania.

Be it the empath or the feeler in me, be it my imagination and Jim Morrison’s story of “Indians scattered on dawn’s highway, bleeding,” I can speak to one of the crash sites.

There was something in the air beyond the measure of science.  There were unknown odors and particles and parts per million, but…something else.  There was an overwhelming and palatable air of shock, confusion, grief, anger, and numbness.  I am unsure if this was generated by the living or the departed, or thousands of pieces of thousands of them embedded in us, crying, dancing, wading our way through the deepest of days.

As traumatic as it was to be in New York City on that day, it was at the same time a great blessing to be there in the days that followed.  Hundreds of millions saw and can still see the worst of humanity displayed on that day, but only a precious percentage were privileged to see and feel and touch the best of humanity in that very same place.

No one was in a rush.  People held doors and waited patiently.  Sneers and snarls and furrowed brows were replaced by faces of recognition, understanding, and compassion.

Kristina and I joined a crowd that had gathered around the John Lennon Memorial in central Park known as “Strawberry Fields.”  There was silence and weeping and hands gripping hands and heavy heads on shoulders trying to be strong.  Someone started to sing “Redemption Song” by Bob Marley.  Many of us joined in and we became a chorus together.

A huge memorial of flowers and candles and posters and effigies sprouted up at Union Square.  People wandered and gathered there, added to it, took it in, together.  There was a great, sad quiet that we all shared.  We were alone and yet together as none of us had ever known.

On September 15, a few friends and I were gathered outside an apartment in Sunnyside, Queens.  Kenny, from Plumbers Local #1 approached, rough and dusty, with a cigarette in one hand and a 40 oz. beer in the other.  He had been at Ground Zero for the majority of the time since Tuesday.  “It’s been a rough couple a days,” he said.  He claimed that “The rescue effort is over – it was over on Tuesday” and that there were “six months of work ahead.”  He spoke of finding the “’good half’ of a body – the part that has the wallet,” and of workers covering themselves up with rubble to give the depressed search dogs the victory of finding someone alive.

Kenny was a Vietnam Veteran, and the sad task of working amidst this devastation and death seemed to have re-activated past traumas.  He said, “PC went out the window on 9/11,” and used racist terms to describe some people supposedly dancing in the streets of Queens.  Try as he might, there were old things he would never forget on top of new things he would never forget.  Skeletons seemed to be bursting from his closet.

Is “never forget” a yearning for the spirit of that tragic, but patriotic day when “we were united by a common enemy”?

Or does it mean “never forget” who we were in the days shortly after, when all things were secondary at best to life and health and safety and comfort and helping ?

I wish I could achieve growth without pain and compassion without loss.  I wish we, as a country, could be united without the inference or interjection of an enemy.  We are certainly not alone, but it seems a trait increasingly particular to the United States, even within our borders, among our own.

O, that there could be no more enemies.  Anywhere. 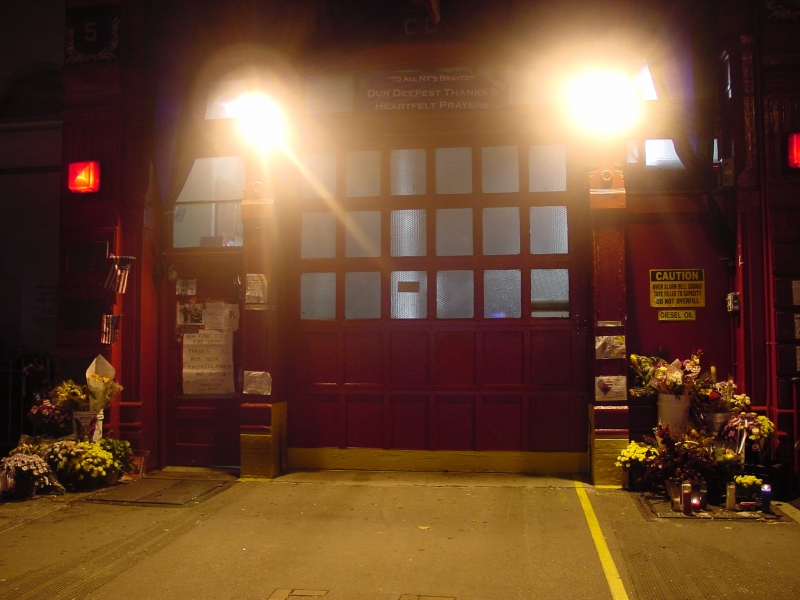